The Band SOTO released their second album, DIVAK, on April 1st, and like their first album, I had the opportunity to write for them.  I composed and produced the instrumental intro track and co-wrote and co-produced the track “Awakened.” I performed guitars on both as well.  In addition, I wrote and arranged the orchestration for the track END_OF_DOCUMENT_TOKEN_TO_BE_REPLACED

Jeff Scott Soto’s latest album, Inside the Vertigo, was released in the US recently! I co-produced the album along with Jeff and even wrote a few tracks and orchestrated parts for several others. Check out his music video for the track “Break” for which I wrote all the instrument orchestration and performed all the guitars! END_OF_DOCUMENT_TOKEN_TO_BE_REPLACED

One of my latest collaborations is the formation of the video game cover band The Tiberian Sons alongside Tony Dickinson, Max Noel, and Travis Moberg. We were very grateful to be chosen to play at MAGFest this year! Check out our latest rehearsal video and give our EP a listen!

To help learn some of the new tools I have in my musical arsenal, I’ve been composing in a greater variety of styles.  I like the result!

Now you can actually get your hands on a copy of Shadow of Agretor!  The physical CD is now available here: http://www.connorengstrom.bandcamp.com/

My new album, Shadow of Agretor, is now available!  Have a listen…

After several delays, my album is very close to being released!  A few things have been reworked, including the new album title, Shadow of Agretor.  It is a concept album, but it also includes a few additional cover songs.  Shadow of Agretor will definitely be worth the wait!  Check back soon for the release!

I’m excited to announce that the track “Rise of the Phoenix” is now available for purchase as a single!  You can buy it here: http://connorengstrom.bandcamp.com/ And remember, my full album is on the way, too!  Be sure to check back for updates! 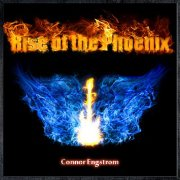 I’m excited to announce that my current album project is nearing completion!  Rise of the Phoenix will be released soon.  Check back here for updates or follow my Facebook page to be notified as soon as it’s available!